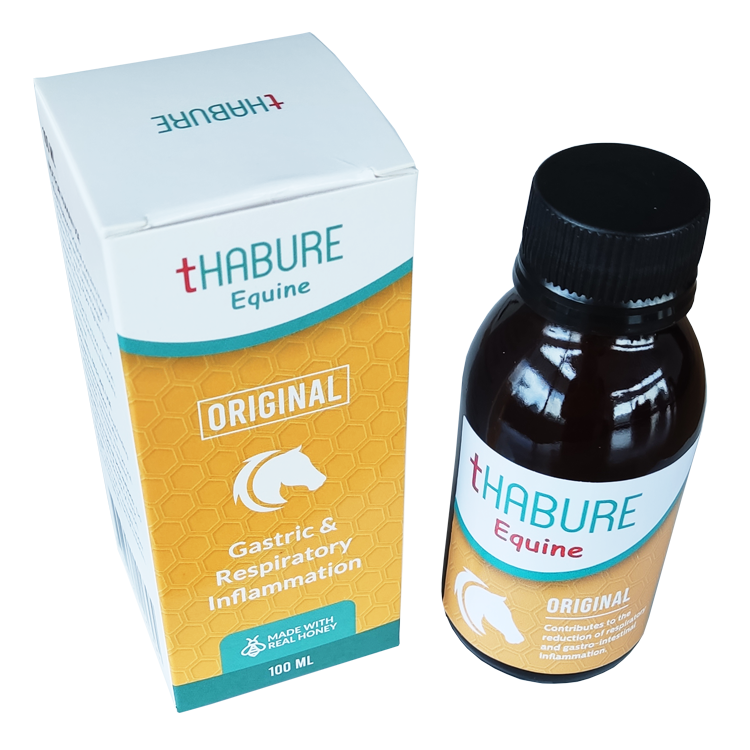 The immunomodulatory active ingredients in Thabure have been published to inhibit the activation of NF-kB, which in turn results in the normalisation of pro-inflammatory gene expression levels to baseline “healthy” control animal levels.  In equids and canines, the remedial effect is typically evident in the psychological condition of the animal often within 30 minutes post administration, as well as the inflammatory associated symptomatology. https://www.ncbi.nlm.nih.gov/pmc/articles/PMC5987016/.

The impact of Thabure on the animal hyperinflammatory response to infectious disease is to limit the progression of pathology towards high morbidity and mortality often associated with a cytokine driven hyper inflammation leading to massive edema.  The inhibition of activation of this cytokine driven hyper inflammation is one of the predicted modes of action of the Thabure ingredients.  https://www.ncbi.nlm.nih.gov/pmc/articles/PMC3372981/

A polyclonal cocktail of antibodies targeted at bacterial and viral pathogens has been formulated into Thabure.  These targeted antibodies assist in the restoration of normal gut microbiota, and this also is predicted to have an immunomodulatory effect on the animal. https://www.ncbi.nlm.nih.gov/pmc/articles/PMC5987016/

Indications are for the treatment of systemic inflammation, through the peroral administration of 10ml of Thabure syrup, typically via a 15ml needleless syringe.

For Canines:  one 5-10ml dose up to 3 times per day.  Same feeding schedules as for horses.

For enquiries or to purchase, contact the following people: